A Komondor tends to be less lumbering and more deerlike in his movements than a Great Pyrenees.  He is known for being very loyal to his charges, whether livestock or human.  A Kom tends to stick close to home and doesn't have so much of a propensity to wander as some of the other LGD breeds.

On the range, a shepherd finds that when a pack comes to attack the flock, the Great Pyr will go on the offensive and chase the pack off, but if the predator tries to come in from behind while the Pyr is gone....he will be surprised to find that the Komondor is still right there with the flock and waiting for him!

The Komondor excels as a human being/family guardian/companion.  He will bond extra close to one family member if given the opportunity, but will guard the whole family with seriousness.  An LGD tends to protect with intimidation first and with force later.  His size is deterrent in itself, but with a full coat he looks truly formidable!

The Komondor is considered to be a hypo-allergenic breed.  He tends to smell more like a sheep's lanolin than like a dog, and his loose hairs combine to form his cords if his coat is kept long, so he doesn't shed.  A coat kept short sheds minimally.  Cords form naturally in the adult coat of a Komondor, but can be helped to be kept neater and tidier by working the coat by hand.  A Komondor's coat is coarse and does tend to hold debris, so it is important to check the coat often.

Out here on the farm and in the pastures we find a full corded coat difficult to keep clean, so we either clip the Kom coats into a lion cut, doing the long areas with scissors, or we use clippers and shear the coat short, once per year.  The stage of coat causes the dogs to mimic other breeds.  People first meeting our Koms might mistake them for an Airedale or a Doodle depending on the time of year!  Most often the question is just a simple "What's THAT!?" 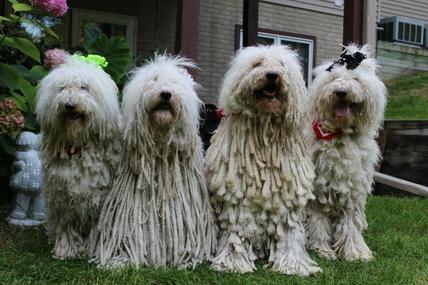 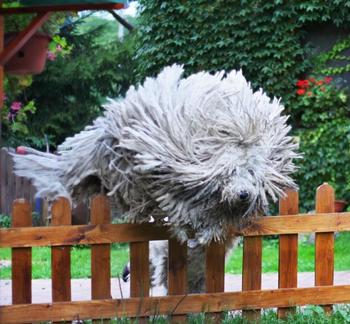 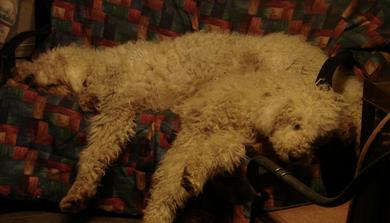 MUM & POP FROM THE CZECH REPUBLIC 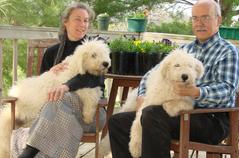 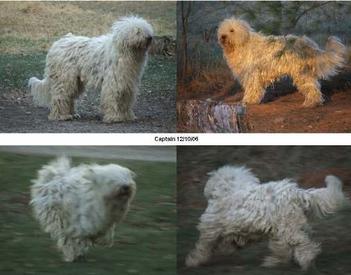 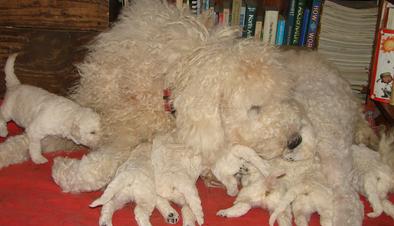 Click Here for Info About Current or Expected Komondor Litters

As Captain and Beauty aged, we were blessed with two daughters from their last litter.  We kept Anya and Akili to carry on their bloodlines.

Adorjan is Captain's new son-in-law.  He came to us from the Czech Republic in 2015.  One night, very late, I decided I was going to look at one last page on the website that I was searching - in futility, I thought - for a son-in-law for Captain.  I came upon an entry that made me say "That litter sounds perfect!"  To my dismay, the breeder turned out to be in the Czech Republic.  OK, I thought, it won't hurt to inquire.  An answer was awaiting me in the morning, and a relationship began with Adorjan's breeder, Sylvie.  It was great fun to discover that Sylvie had a grooming salon in her house, like my daughter has here - but a bit more upscale!  The yard, the picket fence, the hills and trees and their neighbor's sheep all looked so much like those things here at Melport Meadows!  Sylvie made it clear that they show their dogs for the fun of it, and she sent pictures of the wall of ribbons and trophies won by their dogs, and of the couple handling their dogs in the show ring - both husband and wife wearing traditional Hungarian clothing and dogs in gorgeous corded coats!

Adorjan - Addie unless he's naughty! - is also our all-around farm guardian.  Having been raised with a family rather than with the stock until he came to join us here, he is happier with a relationship with people than with the stock.  He is my buddy and is always close-by when I'm out working in our plant nursery.  Adorjan is very tall with a large head and full hindquarters.  He has lighter brown eyes than is typical of the breed.

Anya lives in the pasture with the sheep most of the time, and Akili is usually with the older lambs and whatever sheep are in the barn area.  Both mamas are 28" at the shoulder.  Anya has a wider frame, whereas Akili's is a bit narrower. 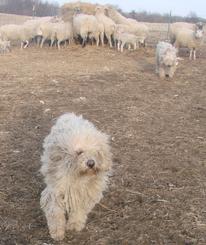 As working LGD's and farm dogs, our Koms get clipped in early summer...thus the portraits in short coat. 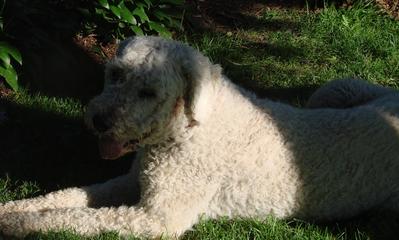 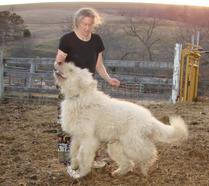 Ancestors of Our Koms 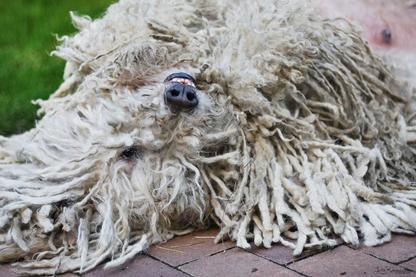 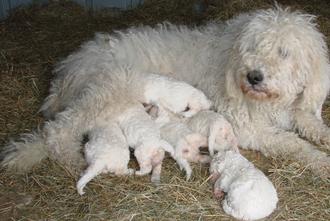 MUM & POP FROM THE CZECH REPUBLIC

In 2010 Mr. Dan Keller gave us a call inquiring whether we might consider adding Komondors to our farm.  He was not going to continue to raise pups, but he wanted his young pair, Captain and Beauty, to go together, and to be able to raise pups.  Captain had been imported from Hungary, and Beauty had very nice Ari bloodlines.  There were those interested in taking one or the other, but no one wanted both dogs.  We said we'd try them and see how they did.

They HATED us!  They had been shown their first year or two and had not met livestock before so we put them in a fence in the corner of two pastures by themselves to get used to their new life.  Whenever we went out to visit them they carried on and acted like they were going to take our arms and legs off!  My husband said "Send them back where they came from!"

Someone recommended that we get the book "The Dog Listener" by Jan Fennell.  I found it through interlibrary loan, read that book, and followed its instructions.... and it worked!   Beauty was the worst of the two.  The book said to completely ignore the dog until he quits carrying on...and then give it 5 more minutes before you acknowledge him in any way. Captain would quit his crazies after about 15 minutes so I could then begin working with him.  I would sit down beside him and work on his coat, talk to him, and wait for Beauty to calm down... that would take a full half hour. Give her the extra 5 minutes and then I could spend some time with her.

Then it was time for dinner.  One of the keys was to eat from their dish (a little people food set on top!), to show them I was their Alpha Dog by eating first and by controlling when I would allow them to eat.  It really didn't take very many days of this treatment before I began to see a complete turn-around in the dogs' attitudes.  They became very faithful dogs.

Beauty really took to the sheep, and it was sealed when it came time for the lambs to arrive in the spring.  She became an excellent livestock guardian dog.  About a year later, when she was given charge of two new young Great Pyrenees girls who were always arguing with one another, Beauty made them to understand that that behavior wasn't going to be tolerated!  She'd roll the troublemaker on her back and stand over her looking down at the culprit until she knew the point had been made!

Captain always preferred to be with the people, though he is fine with the livestock.  He became the all-around farm guardian.