ABOUT THE GREAT PYRENEES....

The Great Pyrenees is known for patrolling a whole farm.  Typically, he will walk the perimeter and check that everything is OK, at the same time leaving his scent to tell predators that he's on duty.  Then he'll go back to his charges....whether flock or human... and make sure all is well.  A Pyr is a very gently dog, allowing lambs and toddlers alike to climb and play on him.  However, when those he protects are threatened, he will take his job seriously.  A Great Pyrenees will first guard by intimidation.  His size and his serious look and stance will cause most predators and intruders to reconsider!  Seldom does he actually need to attack.  But if necessary, he will finish the job right!

Great Pyrenees were used in Belgium by the dairies to pull milk carts for home delivery, and in WWI Pyrs were used by Allied troops to send messages through the mountains.  Pyrs have been the Royal Dog of kings and queens and in some places and times were not allowed to be owned by any common folk!  But the origin of the Great Pyrenees is as the flock guardian of the shepherds of the Pyrenees Mountains in France.

Great Pyrs are said to be difficult to train.  This is not really true, but they bore of repetition and, since they learn quickly, it's best to make your training sessions interesting and varied.  Pyrs have been bred for hundreds, maybe even thousands, of years to work independently of man... out in pastures and mountains and ranges.  That independent spirit is one of the things that makes this breed so unique.

A Great Pyrenees is often intimidating to meet as a stranger approaching a home.  But just as soon as the dog senses that the newcomer is a "good and safe person" his tail will swoop from one side of his ribs to the other as he put his nose in the person's hand in greeting!

If someone comes to Melport Meadows unsure of which breed of our white furries they might be most interested in as a companion, I tell them that if they want a do who is very unlikely to eat their laundry off the line or to jump all over them or to lick them to death or to chew their shoes up or to eat the chickens or the cat, they are after a Great Pyrenees!  Though the occasional pup might do some of these things most are easily taught good manners and gentle behavior.

All of our Great Pyrenees are raised with livestock, including young lambs when available.  But all are also socialized, within the context of their barn and barnyard, with people and with children.  Our dogs often go directly to their new livestock in their new home situation, but many also go as family guardians and companions, and even in a city situation a Great Pyrenees can be a good choice since their exercise needs are typically less than many breeds.  Many of our Pyr pups have gone into intensive training as service dogs, and others have done therapy work together with their owners.  A Great Pyr is truly a wonderful, all-around GREAT dog!

Click Here for Info On Current or Expected Pyr Litters 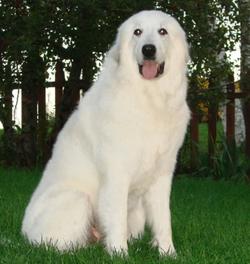 It ALL STARTED WITH A GREAT pYRENEES!

When our oldest daughter became a teenager she decided that she'd like to have a dog...a big one...and enter 4-H with her.  So entered our long history with Great Pyrenees dogs.  Our daughter and her dog, Gwenda, did very well in obedience and in showmanship.

When Gwenda was 3 years old she had her first litter of pups. There were only 3, but the girls had such fun dressing the pups in doll clothes and carrying them in baskets!  We wanted to keep one of those pups, but were in no way ready to do that the year that litter was born.  However, the pup we had wanted to keep became available to us again when she was a year old.  Belle needed a new home in the north due to a move her owner needed to make.  That was our opportunity to purchase her back.

Those first two nights back with us on the farm, after being a city dog for a whole year, we kept Belle with us in the house.  The third night I heard coyotes outside and called Belle to the door.  I put her out and said, "Belle....GO GET 'EM!"  She ran the wrong way...toward the road.  I said, "Belle!"  She stopped and looked at me and I pointed toward the pasture behind the house.  I said, "Belle...they're that way!"  And she turned around and ran back into the pasture.  She chased those coyotes away!  Every night after that Belle was right out on the hill in the middle of the animals - sheep, steers, poultry and horses - barking at anything that sounded significant and patrolling the perimeters like a professional!  Belle was, hands down, the most gorgeous dog I've ever seen.

Gwenda and Belle were our first 2 purebred mama dogs....and we've been raising pups ever since!

We now have Belle's daughter, CERISE.  Cerise may come visit us sometimes during the day, but never fails to be back on her post guarding the animals in the pasture, now only sheep and steers, by night.  Unfortunately, Cerise lost most of her tail as a young pup before her eyes even opened.  She had a sore that we were treating with salve, but we woke up one morning to find that her mom had been cleaning it a little too vigorously...the tail drooped from the point where the sore was.  The vet said it was too late...the tail had to come off.  A tailless Great Pyrenees!  But of course, that doesn't affect Cerise's ability to do her job or her wonderful Great Pyrenees personality!

...Our Great Pyrs are Peerless! 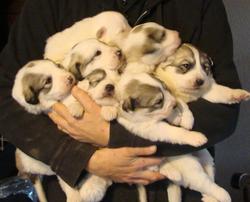 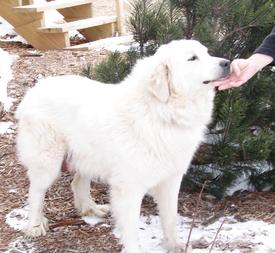 CODY is our current stud dog.  He was born with quite a bit of color, but now only a bit of cream tint is visible on his shoulder.  Often, Pyrs are born with color.  That color tends to lighten as the pups grow, and most often will disappear altogether.  Some lines of Pyrs are bred to retain their color more dependably, and some pups will retain color in their mature coat.  Most will lost it or there will only be some cream to tan color where the dark markings were when the up was young.

Cody wasn't raised with livestock and he prefers the company of people to the stock, so he shares the job of all-around farm guardian with our Komondor guys.  Cody is great with the animals, even with the young ones, but it isn't his preferred job.

Cody stands 30" tall at the shoulder.  We have a hard time keeping full weight on our breeding and working dogs, so he seldom weighs in at his full 125#.

LACI is our younger Pyr girl.  She stands toward the bottom of the breed standard for a female Pyr at 27" tall.  She's a stocky girl with no color in her coat.

Laci greets with a curled up lip that baffled us for the longest time, until our daughter-in-law solved the mystery for us when she deduced that the face that Laci makes is a smile that she only uses when she's happy!  Since then, we've had several other people tell us that their Pyr does the same thing and they've come to the same conclusion....it's a SMILE!

Laci is great with the animals and great with the smallest of children and is very gentle.  However, she takes the job of guarding the areas beyond the barnyard and our plant nursery growing-out areas very seriously.  Every night, all night long, she'll be found at that post taking care of business. 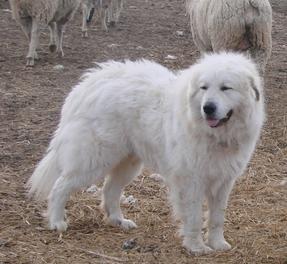 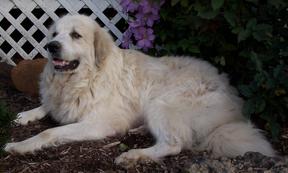 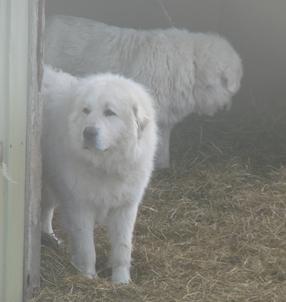