Katiyana is a granddaughter of Nikita and Danika.  Her papa went to Colorado as a pup, and one day we brought one of his daughters back here and named her Katiyana!  Katiyana is a very spirited girl with lots of spunk!  She loves to follow me wherever I go and to lay at my feet while I work.  She has a bit of a mane and a bit of a taper in her coat, but not as pronounced as in her dad and in Yeshka.  Katiyana weighs about 55#.

Kumoki is Nikita's son-in-law!  He is tall and weighs in at about 90#.  Kumoki has a longer coat that hangs more freely.  He has a wide, well-proportioned head and muzzle, and solid, stalky legs.  Kumoki is extremely friendly and likes to take a share of the attention that matches his size!  He has a regal look and plays kindly with his little progenies.  Everyone loves his exuberant personality. 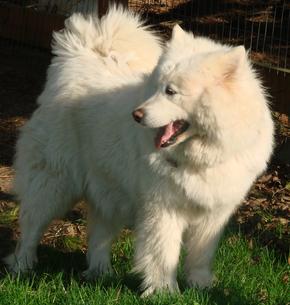 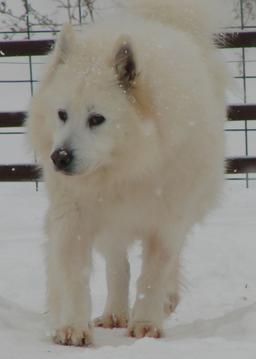 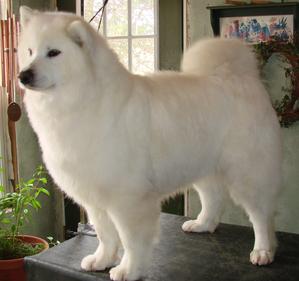 Danika and Nikita are now retired, but they were our first Samoyeds.  They are the parents of Sakira, and the the grandparents of Katiyana.

Danika's coat is a uniform medium-length all over her body.  She has a bubbly personality and is still the Queen of the Pack!  We have a hard time keeping her at an ideal weight of about 62# since she puts on extra pounds easily.  Danika enjoys laying on the porch guarding her pile of bones or being next to me while I work here in the office.

Nikita has a handsome lion's mane around his neck, chest, and shoulders, which tapers to a shorter coat over the back half of his body.  He has a medium frame and a wonderful gait that sold us on him as a pup.  His wonderful gait has allowed him to learn to jump a 6' fence....a trick he taught himself the first time he experienced his girl in heat!  He jumps up and  perches himself on the top of a fence or gate like a cat, and then lets himself down over the other side!  Nikita has a more sedate demeanor and waits to be invited rather than demanding all attention for himself.  He weighs in at about 60#. 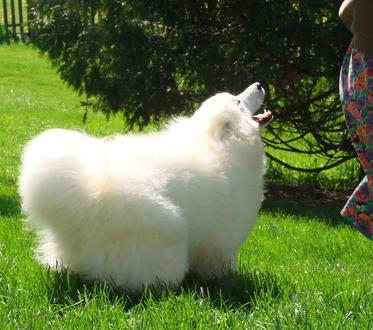 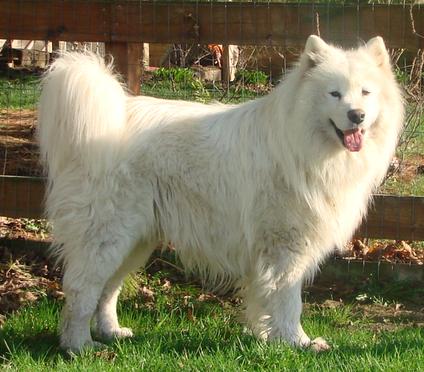 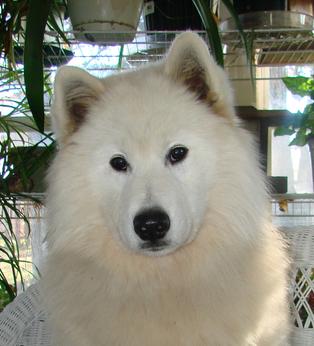 Yeshka is the daughter of Nikita and Danika.  She has a beautiful mane and tapering coat like her papa, but it's a little softer to the touch, like her mama's.  She has a medium-to-light build, weighing in at about 52#, and she has a shorter muzzle.  Yeshka has been full of energy and has done a bit of agility just for fun.

Sakira is also the daughter of Nikita and Danika.  She has a coat and frame which are a composite of her parent's, but leans a little more toward her mama's smoothe ad uniform coat.  She weighs just a bit less, at about 55#.  Sakira is the most talkative of our Sammys and tells us about whatever is going on at the time!